A few weeks ago I was discussing the foodbank situation with my friend Laura, we both shared an empathy and decided that if we could help in some way we should.

Laura’s dad works at The Noah’s Ark Centre foodbank in Speke and he had mentioned to her that although donations of food were coming in, it would be nice if the recipients of the foodbank received some Christmas treats, selection boxes, boxes of chocolates, cakes etc…. you know the kind of stuff  we take for granted.  With this in mind Laura and I decided to rally around our friends to see what we could come up with. The response I had was overwhelming.

I set to work on my Twitter page bombarding my followers with pleas to help donate food if they could. Some people had asked if it was possible to send me a food parcel but to save postage and to open the scope I decided to tell people that if they donated money into my Paypal account I would do the shopping for them. It amazes me to say that in just 1 day the people on my Twitter and Facebook account had donated £115, followed the next day by another £25. I’m not ashamed to say that each time I got a donation I cried, the goodness in these people’s heart astounds me, and I am so very lucky to be surrounded by such amazing people, most of whom I have never even met. I went to Asda and purchased selection boxes, mince pies, Christmas puddings, cakes, biscuits, basically all the treats until the money had run out.

As well as money donations, everyday I had people knocking at my door with bags of food that they had purchased for the foodbank too. People going out of their way, to go shopping and drop them off with me. Awesome, just awesome.

In the one week I was collecting we notched up over 35 bags of shopping! Incredible. Those donations give hope to people facing food poverty, they put smiles on childrens faces who, without your donation might not of had a selection box this year. 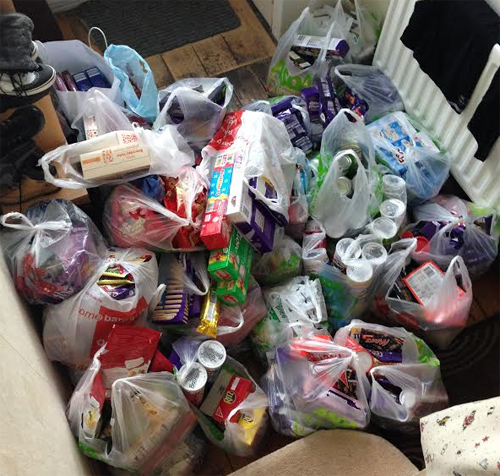 Laura and I dropped them off at The Noah’s Ark Centre in Speke, and they were overwhelmed with the donations that had been collected, they said a huge thank you to all those who donated and said that it would make such a difference to local families.

Foodbanks rely on people’s generosity to be able to feed those facing food poverty. There are many ways you can help, visit Trussell Trust for more information. Find your nearest foodbank and donate food, even one tin can help. A list of food items they accept can be found here.

I just want to say how thankful I am to all those who got involved and help Laura and I achieve such wonderful results. You’re all so awesome!

Just a heads up, I’ll be doing this again next December. If you can help, do.